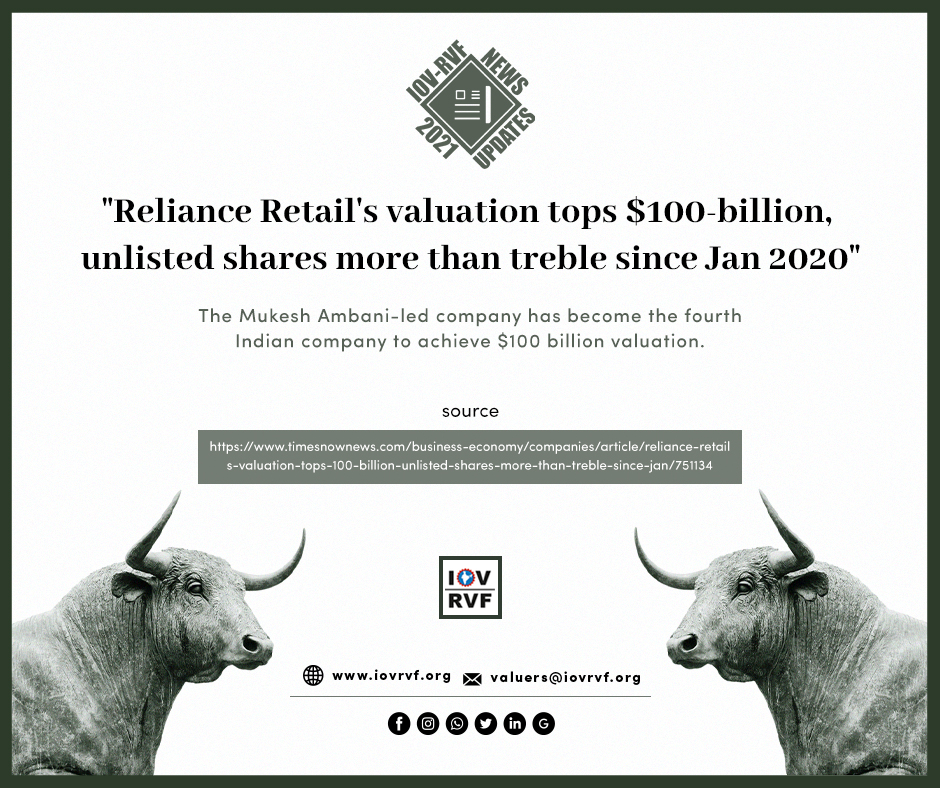 New Delhi: Mukesh Ambani-led Reliance Retail, which sells everything from grocery to electronics, through its chain of retail stores spread across the country, becomes fourth Indian company to top $100 billion valuation. According to a report in the Economic Times, unlisted shares of Reliance Retail have more than trebled since January last year to trade between Rs 1,500 and Rs 1,550. At Rs 1,500 a share, the company is valued at Rs 7.50 lakh crore. Last year RIL tweaked mandatory share swap ratios of Reliance Retail and began stake sales to global private equity funds. Last year, Reliance Retail Venture, the holding company for Reliance Retail, raised nearly Rs 47,265 crore from global private equity funds by selling 10.09% stake. Now, investors are drawing comfort from the fact that the Reliance Group is rationalising business verticals across the board with no additional debt raising, the business daily mentioned citing brokers. “Currently, Reliance Retail shares are traded in the range of Rs 1,500 and Rs 1,550 apiece,” the business daily quoted Sambhav Aggarwal of Arms Securities as saying. Arms Securities is a Delhi-based firm, which deals in unlisted shares. “The premium has more than doubled since last year when the company sold stakes to raise money.” Worth mentioning here is that in December 2019, when Reliance Retail shares were trading at Rs 900 apiece, Reliance Industries announced a scheme of arrangement where Reliance Retail shareholders were offered one share of RIL in exchange of four shares of Reliance Retail. This scheme valued the shares of Reliance Retail at about Rs 380 per share. As a result, Reliance Retail shares declined to Rs 400 per share. However, later in January, in an extraordinary general meeting (EGM), Reliance made the share-swap scheme for shareholders in the retail venture optional as against mandatory earlier. Since then, the stock has rallied sharply in the unlisted market. For the quarter ended December 31, 2020, Reliance Retail posted an 88% year-on-year jump in net profit at Rs 1,830 crore on a turnover of Rs 37,845 crore. The management early this year said that its grocery business and electronics stores maintained double-digit growth while the fashion and lifestyle business delivered a strong rebound, surpassing pre-Covid levels. For FY21, the company is expected to report a net profit of Rs 5,570 crore on revenues of Rs 1,35,310 crore. “With enough fire power, the company is perceived to be doing well, especially when citizens are looking for home deliveries amid a second wave of the virus,” the ET report quoted Vaishali Dhankani, founder UnlistedDaq Venture of Analah Capital as saying. “In spite of no clarity on the IPO dates and which vertical of reliance Retail will come with an IPO, wealthy investors are looking at acquiring this stock from private market,” she said. A recent report by global investment bank Jefferies also estimated Reliance Retail’s value at $100 billion. Source: https://www.timesnownews.com/business-economy/companies/article/reliance-retails-valuation-tops-100-billion-unlisted-shares-more-than-treble-since-jan/751134

Uniform valuation standards for IBC assets in the works

At present, internationally accepted valuation standards adopted by the Registered Valuers Organisation are used by the registered valuers for the purpose of arriving at the cost or value of assets such as plant and machinery and land and building.

IBBI extends limit of participants in CEP progrmmes by RVOs

In order to bring in objectivity and improvements in the scheme of valuation examinations, it has been decided by the Authroity (IBBI) that frequency of attempt in an LIE or valuation examination, as the case may be, for every candidate, shall be determined after taking into account a cooling off period of 2-months between each consecutive attempts of such candidate, thereby making a total of 6 attempts in a period of 12 months.